“UPVOTE THIS!” The Rise & Fall of Reddit’s Black Hat SEO

You might not know it, but Reddit has been pivotal in advancing the virality of some of the most extreme and wacky results on the search engine, simply through doing what the site is known best for – web content rating. In this blog post, framed as a study of a black hat SEO method many found quite innocent, we’ll explore how users – some even unintentionally, played Reddit and Google in such a way that the rule book was ripped up in order to bypass the process used ordinarily to achieve dominance on the search engine. This is the story of a method that took everyone by storm, including those less knowledgeable about SEO, with businesses in the frontline – and how Google with its egregiously delayed response later had to rush to remedy it.

Since Reddit established itself as a mainstream platform to share content, as “the front page of the internet”, the 8th most popular website in the world (as of June 2017) has seen its users on the site encouraging other users to upvote their post for more visibility – in the same light of which Twitter sees its users requesting retweets. This form of promotion, known to Redditors as a upvote is a sign of approval to a submitted content post and can be given out to as many individuals as one wishes, with no cap on decreasing the number of upvotes that a post could receive from the site’s users. This component of the site, mixed up with its majority vote and democratisation of usage put Reddit at the forefront to be the number one site to spread a message organically. The chance to put your content, cause or subject of concern in front of a big crowd with the potential for it to prosper is one many ensure they’re not lacking on.

As time went on, users noticed that thanks to Reddit’s strong domain authority amongst other things, content achieving a high upvote score seemingly ranked well within the search engine – whether on the search results page, the image search or otherwise. This discovery picked up like wildfire, with many individuals treating it as common knowledge that they could easily manipulate the search engine by utilising a digital marketers’ no-go method of keyword stuffing on their Reddit post whilst also achieving an amass of upvotes on a post of theirs that featured a keyword in the header of such published entry. Best utilised on image search, where Google can’t as easily track image relevance to the keyword being searched, Google found itself awash with ambiguous and irrelevant images appearing for a wide array of keywords – relating to various social, political and meme causes that users found others would happily get behind. 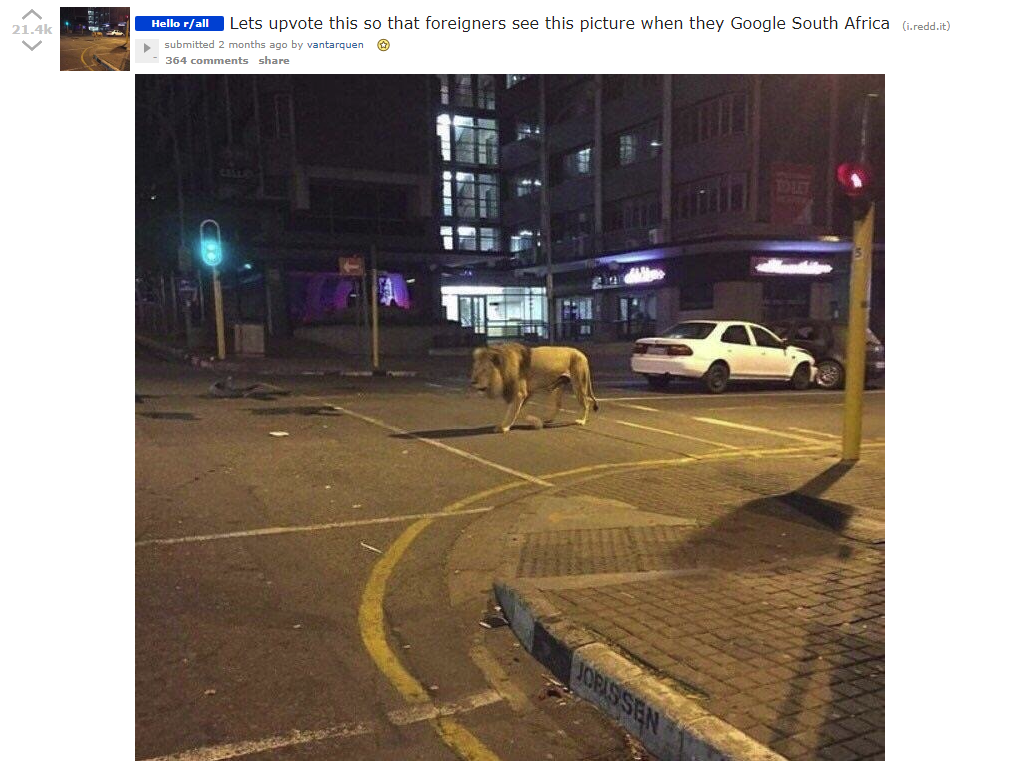 Whether this was the attempt to get fictional Parks and Recreation character Burt Macklin appearing as the first result for “FBI Director” instead of genuine past and present FBI Directors or when users collaborated (successfully, too) to get the German Nazi flag to appear when searching “Comcast” on the search engine – this wacky method achieved more success than would be expected for such a flawed black hat SEO practice.

But with the implementation of keyword stuffing among other “banned” SEO methods being utilised in achieving such success on the search engines for the images they wished to push, how did collaborating Reddit users achieve the success they did? It may have been down to Google themselves. Unlike other sites on Google, which would be viewed by a crawler through the lens of links directing to the site and relevance to the searched keyword term, images and in particular, images on Reddit are much more difficult to understand. With sites like Reddit and Imgur using upvotes to show relevance, speculation could say that Google potentially gave weight to posts that achieved a high upvote score on these reputable upvoting websites that are some of the biggest in the world.

The algorithm of which Google uses is mostly unknown and obscure, with the company opting to refuse to publish patents on their algorithmic methods, but the tidbits of which we do know shows that by any other accord – such pages wouldn’t have seen the light of day anywhere on the search engine through the methods utilised over on Reddit. Whether that be spamming the page with the same keyword over and over as well as seemingly using upvotes to gain relevance – for Reddit, it seemingly did.

In 2016, a little after the peak of Reddit’s black hat virality, it was notable that 9 out of 10 times, no matter how much success a user achieved on Reddit, the image in their post would no longer appear on Google. Something changed in a few months that prevented images from achieving the triumphs of latter years and companies could rest peacefully knowing that prior images that appeared for their business after being targeted in such attempt on Reddit would no longer as easily show. Whilst the likes of internet persona Ethan Klein of whom still appeared as the number one result on Google images when searching for the phrase “Raving”, the Nazi flags that covered the image search results for “Comcast” no longer tainted their brand image, the keyword “side of beef” subdued from the extent of which it appeared with an image of Hillary Clinton and the numerous potatoes assigned by users to appear under various keywords would show no longer.

Although the changes that were made by Google were and still are unknown, during this time frame Google rolled out many algorithm updates including the Quality Update of May 2015 which assesses quality content and made changes to the weighting of factors whilst a further update, named RankBrain in October 2015 brought with it advanced artificial intelligence changes that saw itself become the third biggest important factor for ranking web pages. In 2016, an unnamed and unexpected update which is dubbed the Image drop saw images ranking on page one of the search engine drop by 49% overnight with no sign of recovery. Since then and throughout this time, many other major unnamed updates have taken place – any or all of these which could have worked towards or affected the progress achieved through the viral Reddit upvoting scheme.

Many people have now taken on board that you can no longer simply achieve a high rating Reddit post and see your image appear at the top of search for the keyword of your choice, but many still try – whether for upvotes, front-page popularity or a small faith that they’ll be victorious in seeing their image on the search engine. A few still achieve minor success, but whether that is because of other external factors such as strong link building directed to the image or otherwise, each would differentiate case-by-case.

This long-lasting craze no doubt made a dent in the fabric of the Google search results and I’d expect the last of it to still stick around for many years as more legitimate relevant images slowly replace the dwindling Reddit photo posts that’ll end up archiving themselves. As for the future? It’s probable that Google will continue to roll out more advanced artificial intelligence enhancements into the SERPs which will be able to test an image’s relevance to the searched keyword, with an ever-increasing accuracy.

Despite all this, it seems Reddit will be the ultimate loss casualty here – with a sink in potential traffic coming in that through this competitive advantage that they previously had as well as a fall in links that would have previously been achieved through the Google advantage being pushed by their users. However, Reddit holds no hard feelings and even if they did, here’s How To Get Reddit To Like You.