Twitter is forever updating its service to add more features and usability to its site, with its most recent update allowing users to retweet their own tweet. How this works is the same as you would retweet someone else’s tweet, you find the tweet in mention, and click retweet!

Twitter allowing users to retweet their own tweet opens up a huge new avenue for increasing your interactions and engagements, promoting your content to a bigger audience than would be possible at any one posted-tweet time.

Without the need for tweeting the same tweet again; marketers, businesses and individuals can now repeatedly push our tweets forward, removing the need for repetitive tweet spam to our most recent blog posts or products, links to our breakfast podcasts or our lame industry-related dad joke. We also no longer need to reply to our old tweets to push them back up to the top of the newsfeed, as would be the commonplace practice when re-promoting already existing tweet content.

So what will retweeting our own tweets do for us, and increasing our interaction?

Firstly, retweeting our own tweets will allow more users to pick up on our tweets. We are all aware that not all of us can keep our eyes glued to Twitter all day, unless your job consists of managing Twitter profiles and replying to help tweet-queries, thus with this new feature allowing us to retweet our own tweet we can repetitively share our tweet at peak times of the day in the hope to increase both our tweet impressions and engagements. 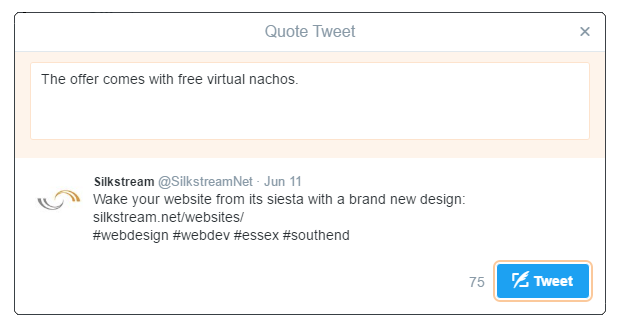 We’re also now able to quote tweet our own tweets, of which is similar to retweeting a tweet except it encapsulates a tweet within a tweet and allows you to tweet share with added information, opinion or comment. Now we can do this to our own tweets, which was not previously possible, the ability to share additional information in relation to our past tweets has never been easier. Updates to events we’ve tweeted about, status updates to site maintenance we’ve previously tweeted about and corrections to a previous tweet has never been easier to announce or share with our following.

So what are you waiting for? Repromote that old content, throwback to a tweet or simply increase a tweet’s interaction. With the ability to retweet and quote tweet our own tweet, it has opened up a world of advanced engagement opportunities.