The UK’s national school curriculum will be replacing ICT (Internet Communications Technology) with Computer Science September 2014. In the past, ICT is notorious for being quite a dull subject with students forced to familiarise themselves with the basics of every Microsoft office application there is. However, this change in curriculum will mean that children as young as five years old will be taught technical concepts such as computer algorithms and programming.

As evidenced by the debates online between current ICT teachers in the country, they have definitely become divided in the upcoming change in curriculum. There are those who are eager for the changes, and seemingly cannot wait to teach them, whilst others are fearing for their jobs since they now have to learn real computing beyond Microsoft Office. However I’m sure they won’t have to worry too much considering the shortage, I assume, of ICT teachers who are proficient in programming. But in order for the new IT curriculum to be a success, existing teachers will have to be equipped with the tools that they need to teach Computer Science.

According to National Foundation for Educational Research, only 14% of a sample of 770 primary and secondary school ICT teachers regarded programming skills as a high priority for the new IT school curriculum. I’m inclined to disagree here with the vast majority of these teachers and let me tell you why:

What does this mean for the future of web development and other IT-based careers? 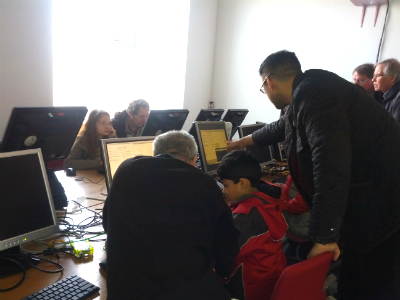 As we enter deeper into the digital world, the UK has been falling behind with an increasing demand for jobs requiring high computer literacy. According to an Oxford University report, they figure that 47% of jobs will eventually be computerised. And who will be maintaining and programming all those computers and designing their interfaces? The government is well aware of the fact that we need to be preparing for the digital future if we want to succeed in it. By giving children as young as five early access to this type of learning, we provide children with a gateway into the web industry when they leave.

Last Saturday, I attended the local Southend Raspberry Pi Jam and was audience to a number of different talks. One that I found particularly interesting was given by Michael Mentessi, the community manager of Code Club. Code Club are a volunteer-led non-profit organisation, sponsored by companies like Google and Amazon, that teach web development and programming to children. Through a series of different opensource lesson material available on Github, registered volunteers are able to teach skills such as HTML, CSS and Python to children who are interested in learning at after school code clubs. They currently have over 2000 code clubs in the UK and are aiming for 5000 by 2015. I’m sure that the popularity for these after school clubs will only increase after September, when children who are especially interested in computers and the internet will get a taste for coding and want more than what their school provides.

Children currently just aren’t exposed as much as they should be to the working technology behind every day things. They buy (or have bought for them) the latest smart phone without giving thought to the components inside of it. They fiddle on said phones, browsing websites and tapping pixelated birds in the app of the week without questioning how it was made. It merely exists to entertain them. Without being told from an early age “You can design a website like this! You can develop an app like this!”, they don’t know their full potential. You can’t discover a talent or passion for something if you’ve never been introduced to it.

I think that September’s change in curriculum will encourage children’s enthusiasm for technology. It will also encourage creativity rather than following a simple worksheet instructing students to “input the following data into the spreadsheet”. They will have to learn to think logically and critically to overcome problems.

The recent popularity of sites, like Codecademy, that teach programming and web development languages from the very beginning prove that there’s definitely a growing interest in coding. Technology plays a huge role in modern life and will only continue to do so. These skills will be necessary to further launch the UK into the digital age. And it starts with teaching the children of today how to code. I certainly wish that I had had this educational opportunity when I was still in school.