Predicting the End of the World with Google Insights

Having a scientific brain means I only believe what can be proved. So with the predicted 2012 apocalypse just around the corner I was interested to see what type of searches this “global event” is drawing across Google worldwide. And what i found may just make even the most skeptical reader think twice.

As you can see there are very little searches on the subject until 2008 with the peak searches happening now. This makes sense because as 21st December 2012 draws ever closer then interest in this topic will peak.

The spike in Nov 2009 marked F is when Roland Emmerichs apocalyptic movie 2012 was released.

The spike in June 2012 marked A is from several reports across Miami, Florida of cannibalistic killings that were originally reported to be zombie-like attacks.

So I then searched for “Zombie Apocalypse” and overlayed the findings in red on the previous search for “2012 apocalypse” in blue.

Now we can see there is a massive spike in searches for “zombie apocalypse” during June 2012 in which searches peak for this term. This confirms that people were searching on Google for news related to the zombie-like attacks.

Now this is the scary part….

If you are reading this article and wondering how on earth a mass spike in searches could signify the end of the world then read on….

Google Insights for Search also offer the option to upload your own data. The CDC (Centre for Disease Control) are one the many authorities that contribute to this data. The following image captures in red searches across Google US for “symptoms of flu” compared to the data in blue which is reported cases of “influenza-like illnesses” as uploaded by the CDC. 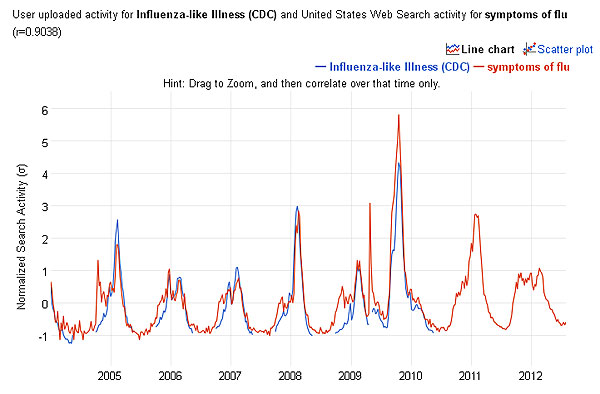 You can see from this graph that the data provided for the actual recorded cases of influenza is very close to the amount of searches on Google US for the “symptoms of flu”.

This makes sense. Most people tend to search on Google to diagnose (or misdiagnose) their illness before visiting a doctor. But Google data is available almost immediately whereas the CDC data takes approximately 6 weeks to be recorded, and in the case of a real zombie apocalypse  or “end of the world” event, 6 weeks later would be far too late to warn people.

So would Google know the end of the world was approaching before the rest of us??

What do YOU think?